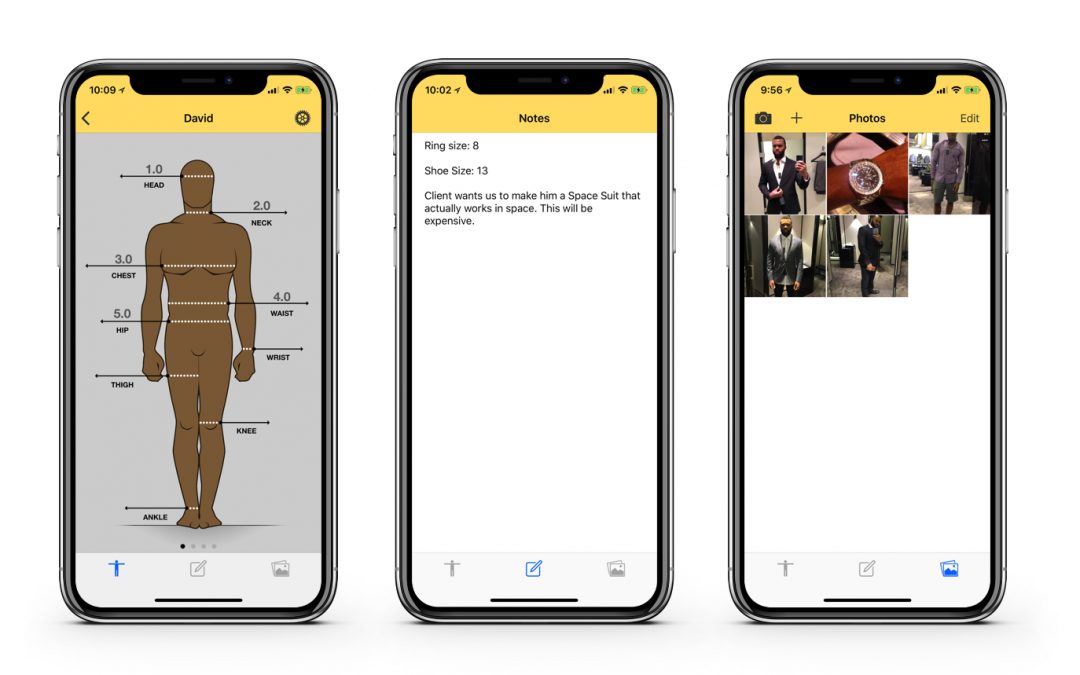 Dress Measurement version 1.3 is about to hit the App Store. We currently have over 9000 downloads, and a 4.5/5 rating on the App Store, but we know that our app needs plenty of improvements.

Before we launch, I wanted to take time to let our users know that despite our silence and despite our shifting priorities for other projects we’ve been working on, we’ve been listening to your feature requests and suggestions for Dress Measurement.

Needs to be a way of syncing across devices, transferring data other than with a pdf file.
– Rpmczzz, Canada, April 15, 2018

No measurement for feet or fingers and it would be great to have a button that would convert cm to inches instantly while looking at the picture not only when u go to settings. I prefer cm but like to know inches quickly if I need it for cloth. Also a screen note under a picture would help us write personal things like cloth sizes and etc that would apply when looking at our measurements.
– Jamal-Pasha, Australia, March 12, 2018

As another user mentioned, there are additional measurements I would like to be able to include. As a customer I would like a way to also store common sizes is: shoe, hat, standard shirt….maybe a notes section for really random items like finger dimensions, facial measurements.
– Jn708p, United States, February 24, 2018

I wish it was possible to edit the measurement titles. There are some measurements that are not on the app which are also useful. Examples are
Nipple to nipple necessary when drafting apex points on women. Also bust point which is the highest part of the shoulder to the nipple. It would have been a perfect app if it allowed users to customize measurements. It seems so fixed.
– Rnakala, Canada, December 23, 2017

It would have been superb if the app saves data over the cloud, incase app was deleted or downloads on another device. I love it though, really useful.
– LuchiMeasures, Nigeria, October 21, 2017

It’s a fantastic app but I really wished it could sync on all devices.
– Fashion designer & stylist, India, October 8, 2017

Great for measurements. I also wish there was a notes section – it would also be handy to have a ‘sizes’ section. I use this for theatre and having a dress, shirt, pant, and shoe size list on a page would be very beneficial to this app. Still better than any other premade measurement sheet available.
– Lizzica, United States, September 17, 2017

Nice app but please make app more robust by creating room for notes on each profile and making it possible to send multiple profiles at a time across multiple channels other than just email.
– ndidinwange, Nigeria, August 26, 2017

There are plenty more reviews, but they all have a common narrative: everybody wants iCloud syncing, after that, our users want a notes section for each profile, a pictures section for each profile, and custom body measurements. Back in June 2017, I wrote a post about what’s going on with Dress Measurement, and these are the upgrades I said we’d be working on as soon as I hired my development team:

Well it’s been a long while since June 2017, and as of December 2017 we began work on Dress Measurement again. Here’s what we’ve accomplished so far.

So now to answer a couple questions you might have.

Why the Tailor Shop Subscription Tier?

Some of you who have been with us from the beginning know that I first built the app in in May-June 2016, and released it free on the app store on June 20th 2016. The only paid portion was an in-app purchase to remove ads. Since then, Aeeiee has grown, and we have several talented developers working on Dress Measurement now. To continue to keep the lights on and pay everyone’s salaries, we’ve got to make the app profitable to justify the amount of work we’re putting into it, so that’s the reason for the subscription tier.

From our correspondence with Dress Measurement users over email, and the reviews we’ve received, we know that the people who use our app the most are involved in the fashion industry in some way in either creating or altering clothing. I’ve even spoken in person with some people at big department stores that use our app.

Many use our app to help run their businesses and manage their customers. Others use our app to take client measurements and send them off to another department in another state that actually creates the clothing. Some use our app to store measurements for runway models at fashion shows. We really want to cater to our more engaged users by doing what we don’t really see anyone else doing, which is building mobile software for the needs of fashion designers, tailors, ateliers, seamstresses, and the like, just by asking them what they want.

Back in June 2016, I set out to find a niche group of users who were looking for clothing measurements and client management on their phone. Now that we’ve found thousands of those users, we’ve been listening to what they want, and building out the software just for their needs. Tailor Shop was “tailor made” for them.

What about custom measurements?

Custom Measurements are on their way, and we already have a working prototype that lets you draw out your own measurements on the app. We’ve been brainstorming how to integrate custom measurements, while keeping the minimalist, yet intuitive user interface that you’ve come to expect from us. In the coming days, we’ll be dedicating an entire blog post to custom measurements, and providing a video demo of what we’ve been working on.

What about the free users?

We haven’t forgotten about you at all. We have two key features planned for free users. First, we want to be able to translate your measurements into standards clothing sizes (S, M, L, XL, XXL) for various department stores, and countries. Second, we want to take advantage of your phone’s camera to be able to estimate your measurements. This literally means having a friend snap your photograph using our app, and automatically turning that data into measurement estimates. It turns out the features we’re working on for free users are much more difficult to implement than for the paid users. We’ll have to delve into some spooky stuff like machine learning to properly implement photograph measurements, and that is going to take a while.

Once we have the budget to allocate towards development costs, we will build an Android version. We, uh, don’t have the budget yet…but who knows, Tailor Shop is a thing now.